I used to dislike conferences. Actually, that’s not entirely true; I will admit I did find it enjoyable to be in a room of people who had the same aspirations as I did. Maybe it would be more accurate to say that I dislike that conference culture can sometimes be an echo chamber, or “preaching to the choir.” While I’m surrounded by so many inspiring and influential people, conference structure often means I’m not necessarily exposing my personal lens to challenges and fresh perspectives. In Urban Environmental Education, we are in pursuit of diversity, equity and inclusion in the field of environmental education, but how are we genuinely practicing these concepts if we attend conferences to talk about what we already know we have in common?

In 2015 I attended a “conference” called Natural Leaders Legacy Camp in West Virginia. Admittedly, my main motivation to go was that I had never been to the eastern United States. I wouldn’t say I had low expectations, but I had conference expectations (see above)—and then those were beyond blown out of the water and rocketed off into space. When I returned back home to Vancouver, B.C., one of my coworkers asked me how the conference was. I felt like I had just eaten a whole box of Kraft Dinner topped with parmesan and it was still sitting in my esophagus. “It was way more of a valuable experience than I thought it would be, and I still haven’t digested it yet.”

What exactly made it so valuable? First, I appreciated the fact that while we had trainers, they weren’t put on a pedestal as experts lecturing the rest of the participants. We were asked to reflect on personal experiences and contribute our perspectives to the group. With this dynamic, participants were able to form a closer bond, sharing unique qualities and ideas that stem from our home communities and cultures we identify with. It was talking about these differences that really sparked new wonderment and nurtured my abilities to learn and grow. This March, the Regional Natural Leaders Legacy Camp was held in Seattle. I was humbled by the amount of experience—in and out of the field—brought by each participant. As a trainer, I emphasized that our goal was to leverage the existing awesomeness of each person and focus on relationship building to determine how to support each other’s work.

As a part of the Legacy Camp weekend, we were asked to bring something from our culture to share with the group. The wide-ranging definition of the word “culture” excited me; I was itching to see how everyone would interpret this idea. “Culture” is often thought of in reference to one’s ethnic background, but I also believe that each person is multicultural in and of themselves.

In the past, on “Multicultural Day” at school, I’d usually bring fortune cookies or red envelopes. At the Legacy Camp Culture Share session, I was really jazzed to share the “British-Columbia-art-in-the-outdoors” aspect of my home culture. Someone followed by playing the ukulele and spoke about being queer in the environmental field, and someone shared a beautiful personal narrative of historical trauma deeply embedded in her mixed-race family. We laughed, we cried and we celebrated the things we are proud of and that made us unique. 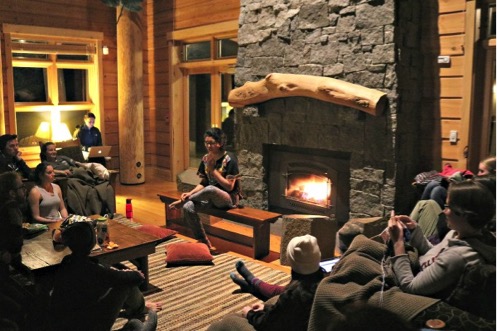 What I found especially touching was that there were participants who didn’t initially feel compelled to share anything about their ethnic background, but as the night by the fireplace continued on, they found a desire to talk about a culture they identify with. The Culture Share started at 8:30pm after a long day, and I didn’t see anyone leave until three hours later. I was misty-eyed by the love and support of this newly formed community of the Seattle-area Legacy Camp 2017.

I want to keep going to conferences. I’m hoping that in the future, conference culture will include more experiences like this, an array of diverse qualities, perspectives, experiences and sub-cultures. I would like to challenge us all to think: how can we create space to display the diverse cultures within the field, and foster genuine connections that maximize the insight one could gain? How can we build bridges, and strengthen and support existing communities within the field of environmental education?

Jamie Chong is an alumni of the Urban Environmental Education program.

Environmental Studies & Sustainability
urban environmental education
Information and Tools Necessary to Address Current Opiate Addictions
What Jobs Can You Do with a Master’s Degree in Mental Health Counseling?